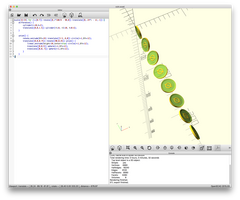 Nothing major gameplay-wise, but I'm finally getting more final assets in. In particular, there is now a nicer-looking coin.

My process for making the coin started out with me launching Blender, realizing that I still don't actually know how to use it, launching OpenSCAD instead, and then modeling the coin procedurally. Originally I was going to put a little ¢ symbol in the middle but I couldn't get sweep angles to work right and anyway using a null set indicator seemed a bit more fitting with the overall zen theme.

For the actual rendering, I ended up importing the model into Photoshop and used its built-in render functionality. Which is still just as painful to set up as it always has been, but at least I got it working, more or less.

Rather than render each frame individually I found it a lot easier to just bake all 8 animation frames into the model and light them all at once. Because Photoshop.

On the plus side, the rendering is actually just a part of my sprite sheet, so tweaking the material parameters is pretty easy.

Other changes include... well, not much else, really, just removed some of the debug console spam, I guess. My git log also lists "improved mountain." So I guess I improved the mountain in some way.