Finally drew the monk, and made it windy 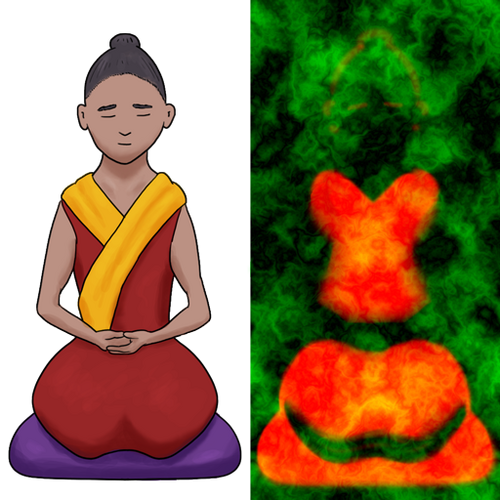 So I finally got around to drawing something approaching a final Monk. I'm not that happy with how it turned out (because of my usual self-criticality in my art vis-a-vis it not turning out how I imagined it) but oh well.

Anyway, one of the things that I've done for this is to make a wind displacement effect. The monk lives on its own sprite sheet (shown above), and what you might notice is that the sprite sheet has two images - the monk on the left, and some glowy red bits with green haze on the right.

I experimented with a few different ways of generating the wind map, and what I eventually settled on was Photoshop's "difference clouds" filter applied repeatedly. It seems to give a nice windy-looking entropy without it appearing too regular and too clustered; originally I thought I'd want the displacement map to be little Gaussian blobs scattered about but that ended up not looking very, you know, good.

Anyway! There's a few other things I've done since the last devlog:

So, yeah! All I have left to do is to draw a bunch of animal heads. (Well, and wire up the code for that as well. Hopefully the next devlog!)